We might not yet be ready to deliver an easy-to-install mobile client, but at least Erkan has proved it is possible to port twister to this architecture. Great job!

twister paper has just been published on International Journal of Parallel, Emergent and Distributed Systems:

twister: the development of a peer-to-peer microblogging platform

Thanks everybody that contributed!

The access to the revised version above is probably restricted to university and librarians domains. However an older pre-print version may be seen here /?attachment_id=355

I’m still trying to make complete sense of this, so please apologize me for any mistakes. I don’t read Chinese and automatic translations tools sometimes produce nonsense stuff. This is utterly complicated by Orwellian police procedures.

A Chinese guy known as @lovechan64 was arrested by Shanghai police last May 30, on charges of “the crime of destruction of computer information systems”. lovechan (known in twister by ids @lovechan, @z9 and @9z) is a well known twister promoter, having publicly talked about twister using his Twitter account multiple times.

According to some sites:

It is understood that 陈乐福 network called “love chan”, is committed to promoting social networking software twister, on May 30 was arrested by Shanghai police. twister is an open source P2P microblogging network, which is characterized by the message sent can not be blocked, not deleted after content publishing, publisher’s identity can not be tracked.

Love Chan @ lovechan64 Chen Yuefu committed to promoting #Twister, authorities Detention he seems to be afraid of this thing. Another reason may be that he helped some of the dissidents face to face counseling over the wall.

I’ve asked chinese twister users about this. Some confirmed and others reported another reasons.

@mfreitas @yangxiao no, it’s NOT because of twister, it’s because @lovechan (aka @z9 @9z ) helps @xiaolan spreading leak of 50-cent party. @xiaolan is anonymous but @lovechan is not, @lovechan even uses his own photo as avatar

I’ve tried to understand a bit more about this, and it seems “50-cent party” is a group of people who receive money from Chinese govt to post good things on public forums and stuff like that. This seems to be officially demised but recently someone (not @lovechan) obtained, and then leaked, a private email containing a list of these people. @lovechan is reported to have helped publicizing such leak.

Either way, this is serious stuff that we should bring awareness about. The guy is definitely detained as reported here. He is married to Lee Funchang who just gave birth to a baby last Jun 5th. The guy is still detained and has not yet seen the baby.

It looks like the guy was found by old police job (he apparently didn’t tried hard to hide his identity) not due to any twister failure. Anyway it is important to realize that, while it is ok to use twister over a plain networks for reading the news and casual chats, if you have really serious and dangerous shit to say by all means: create a new user and only connect twister on top of Tor. twister alone won’t protect you against Orwellian governments!! (note: i’m referring to public posts here, twister’s DM and Group Chat content should be safe even without Tor)

Stay safe and let me know for any corrections.

Update: No, I don’t think @lovechan was identified because he was not using Tor. He posted the leaked files using his wife’s account (see below for @chinanet’s comments). Of course, it doesn’t matter using Tor or not if one signs with his real name.

Users following our github repositories commits may have noticed that two cool new features have been added to twister-core but are still lacking UI support (twister-html), these are:

So what this mean, in practice? This means that these two new and experimental features are already available for the brave who want to play with twisterd command line interface. There is no time frame for these to appear in twister-html. In fact, I may attest that we currently have much more experienced Javascript contributors to twister-html than me. I’m not personally working on UI for any of that.

In case of group chat, it is an almost “invite only” feature so far. The thing is that if one invites you from the command line interface, you will then be able to join the group chat using standard twister-html DM screens…

IP changes are relatively common, they may be due to a router reboot, ISP forcing an IP change, switching from work to home network etc.

If twisterd fails to detect that our external IP changed then the DHT network doesn’t work. User will see a sluggish UI, failing to load avatars, replies and statuses.

This should be fixed now. Please give it a try!

This new feature may allow people to follow more users and display only the posts on language they understand. Given the heterogeneous twister community with users speaking Russian, Chinese, French, Portuguese, Turkish and even English, this is a very handy addition!

Language filtering options have been added: 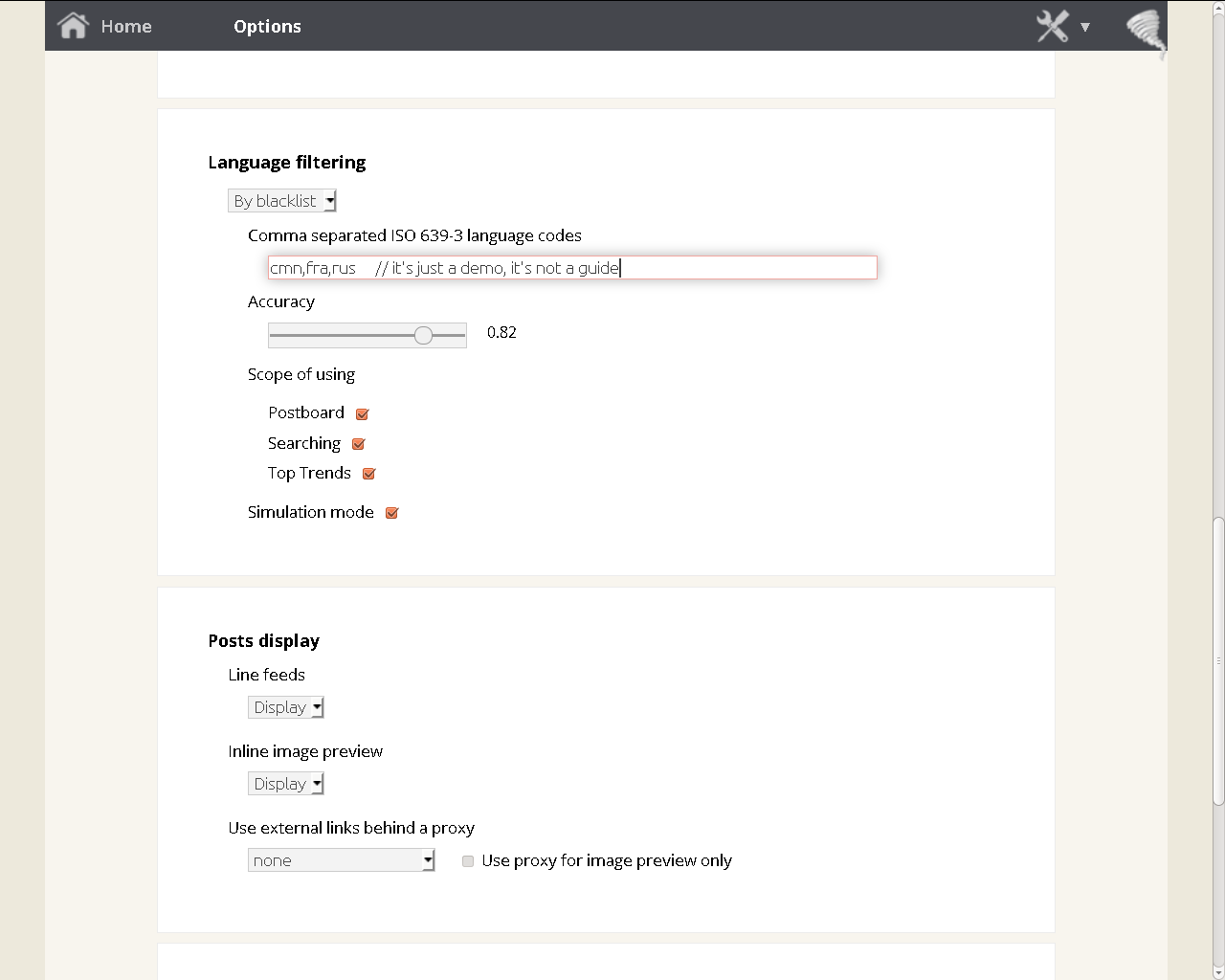 Then, before enabling the filter, one can try how it will work by running the cool “simulation mode”: 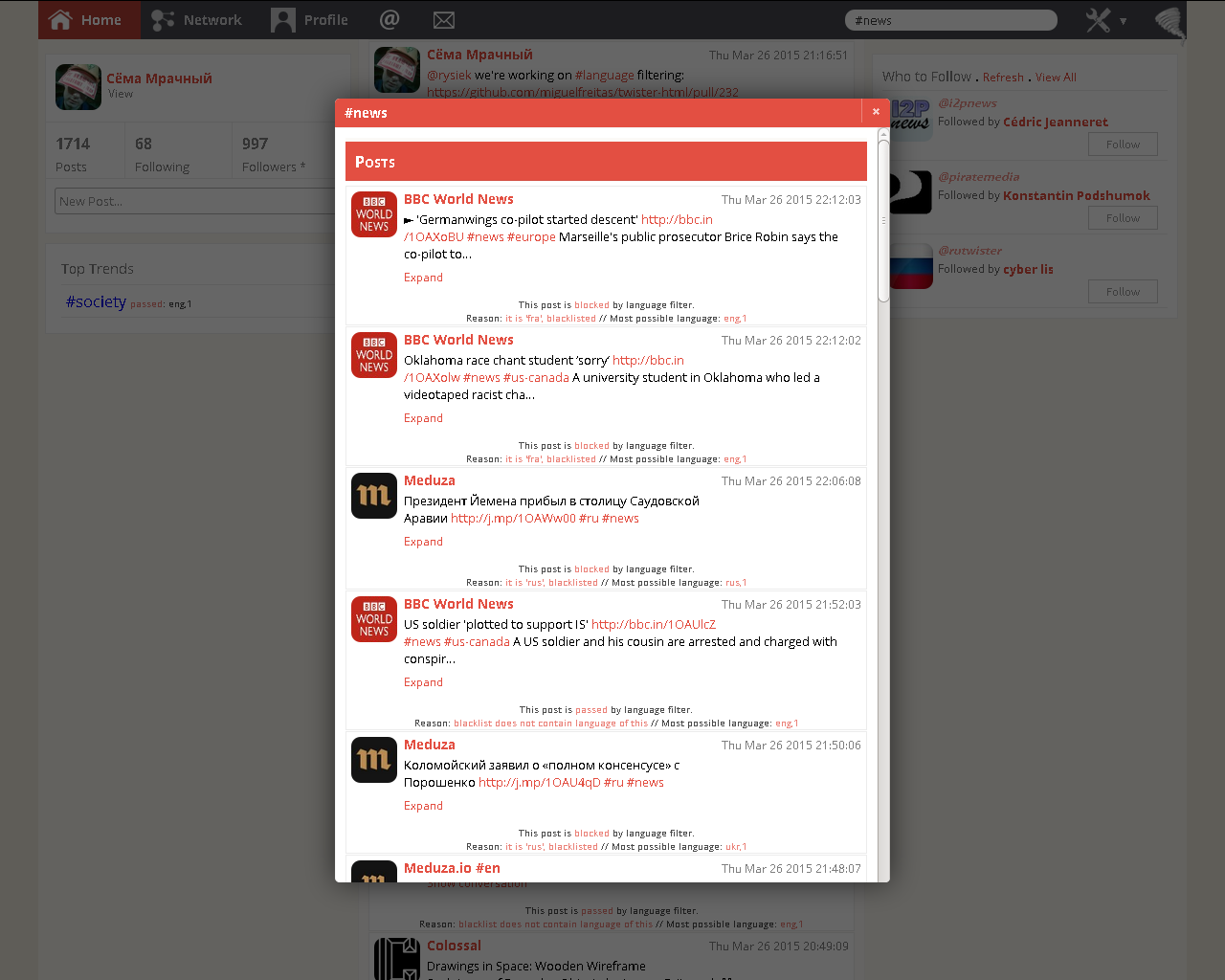 Besides language filtering, Top Trends got an optional auto-updating feature every 2 minutes.

Thanks again to everybody involved!

A new VirtualBox image is available pre-configured with all utilities (android-sdk, ndk…) and dependencies (openssl, boost etc) needed to compile twisterd for Android.

Thanks to the nice Open Build Service (OBS) provided by openSUSE we now have automatically built RPMS for the following distros:

The first one should launch twister automatically, that is: creates a random password for browser<=>twisterd authentication, setup an initial ~/.twister/twister.conf, and then open a new browser window.

twister Control Panel will allow users to configure twisterd as a deamon which starts when user first open his graphical desktop session. It is a pretty simple utility which looks like this: